Theatre of Opera and Ballet

Preciosa’s contemporary lighting installations are famed for their creativity and interactivity. But our long heritage means we are pretty good at historical and classical lighting as well. This expertise is why the Theatre of Opera and Ballet in Kazan, Russia, chose us for a very special reconstruction project.

Kazan is the capital and largest city in Tatarstan, Russia. On the 1000th anniversary of the city’s founding, officials undertook a large-scale, city-wide reconstruction project. One of the buildings scheduled to be refurbished was the Theatre of Opera and Ballet. Originally built in 1956, interiors and the exterior were designed in a modern neoclassicism style and combine classic forms with Tartar national ornaments and elements of decorative and applied art. Architects realized the existing lighting either needed to be repaired or completely new lights needed to be produced. They called on Preciosa Lighting because of our expertise in historical lighting reconstructions.

For both the theatre and Preciosa, it was important to preserve the original design and historical appearance. We produced identical replicas of the historical chandeliers including preserving the Tatar designs. If new chandeliers were required, we produced new ones corresponding to the original lights.

The central chandelier is the most impressive, at more than four metres wide. Unbelievable crystal brilliance is embodied in this chandelier; with nearly 57,000 octagon trimmings. These trimmings were hand-pinned in the shape of butterflies by eight women, working for five days at 7.5 hours a day. In addition, because the original chandelier was pear-shaped, we also used more than three hundred pear-shaped crystal trimmings.

Another reason Preciosa is valued for its historical work is because of the foundry. We are able to cast parts in-house, and for this project made forms with Tartar motifs to keep the accuracy. In a project that lasted a mere four months, Preciosa produced 224 lights, including chandeliers, pendants and wall sconces using tens of thousands of crystal trimmings. 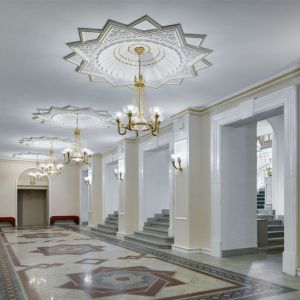 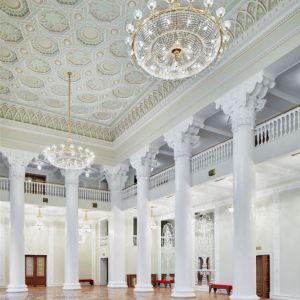 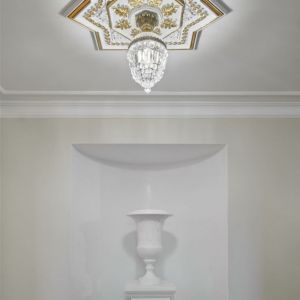 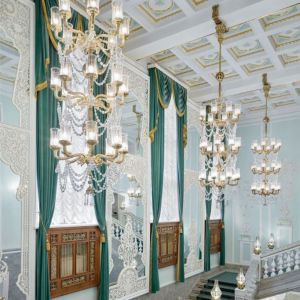 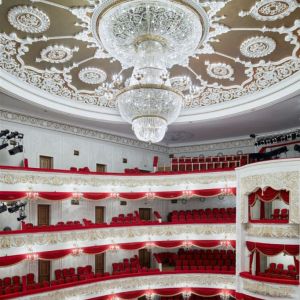 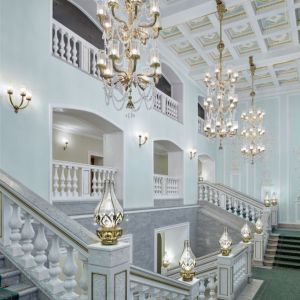 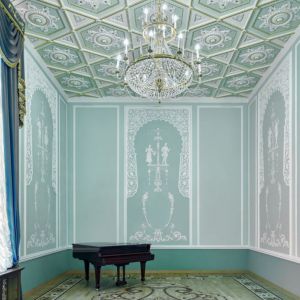 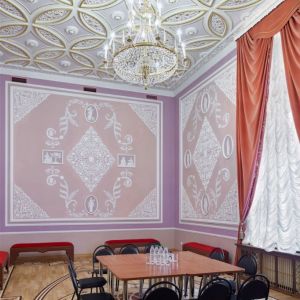 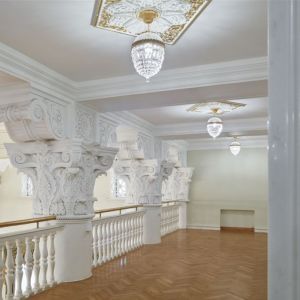