Jiří Šuhájek: Is there anything better than glass?

This year's IGS International Glass Symposium hosted several prominent artists. Among them was Jiří Šuhájek, a glass designer who, thanks to his personality and originality, is one of the most interesting icons of his generation. This year he was inducted into the Hall of Fame. 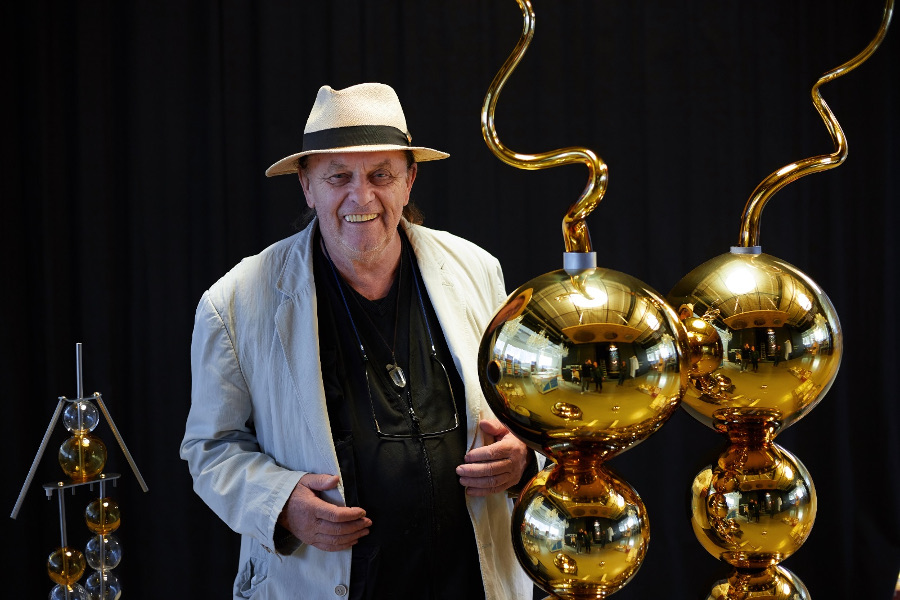 For IGS, Mr. Šuhájek created a masterpiece that celebrates the female element - mother and child. Mother, alias Lady Glass, is a 3-meter high statue composed of hand-blown glass balls and ovals. It is accompanied by a smaller work, a 1-meter upright figure of a child, which will be exhibited at a museum in the town of Nový Bor.

"I've done tons of tiny products,” Mr. Šuhájek said. “When one begins to work with glass, you are only allowed to create small things - glasses, bottles, vases. I said I had to do something bigger.” 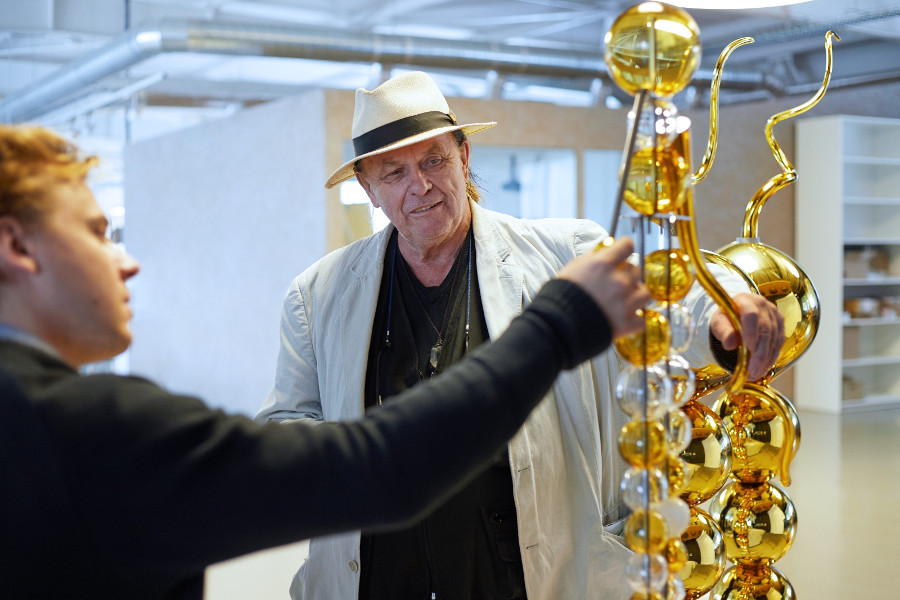 And how did he actually become interested in glass? "I was originally pretty much an athlete,” he shared. “I did athletics, basketball on a professional level and I enjoyed it. I also enjoyed drawing, but it wasn’t so important to me. When I finished school in Česká Lípa, the school in Šenov had just reopened. That year!”

“I went to the orientation and liked it, so they accepted me for painting. At that time there were so-called ‘placement tickets’, and they placed me in Karlovy Vary. I didn’t want to go there, but I found it to be the best place for me -- I could play basketball and do athletics. There was one man, named Mr. Mrnka, and he told me to join the Academy of Arts, Architecture and Design. My first year I wasn’t accepted, and Mr. Mrnka said, "It doesn’t matter, you'll pass the exams next year." And I did.”

"I’ve had a guardian angel all my life," Šuhájek said, recalling that in the beginning of his studies he studied at a painting studio at the Central School of Applied Arts in Kamenický Šenov. He then went on to study at the Glassworks of Stanislav Libensky at the Academy of Arts, Architecture and Design in Prague and the Royal College of Art in London.

"I went on a trip to London five days before the invasion (in 1969),” he said. “Thanks to a man named Mr. Moon, who was very important, I received a scholarship to the Royal College. After a year I wanted to go home, but Mr. Moon said, "You're crazy, there's the occupation." I received my degree in London. I always had a mentor who showed me the way to go. It's a coincidence. When you're smart, it does not mean you win the lottery.”

According to Mr. Šuhájek, glass has a great future, but the industry needs people who can do the work it requires.

“I was in Scandinavia, in Russia, in Ukraine, in Turkey, in the US...Americans liked glass and started to build furnaces at schools. I think we are the only glassmaking country that does not have a furnace at an art school in Prague, a hardly believable story. The main people are people who have some relationship to glass. Time has begun to promote glassmaking in some way. Every company, like Preciosa, should help, hold a symposium once a year, and invite people in the field.”

And what does the artist plan to do next? What else but glass.

“Is there anything better in this world than glass? It's transparent, colorful ...the material itself is fascinating and interesting,” concludes Mr. Šuhájek.