Ahpo yacht is a superyacht filled with luxury amenities like a gym, spa, dance floor and beauty salon. Ahpo´s design language is all about connecting her six decks into one whole. An important part of this was blending the naval and technical elements with the living space. The yacht’s interior design was done by Nuvolari Lenard and Ahpo’s naval architecture was managed by the developer, Lürssen.

Preciosa helped bring the vision to life by designing a lighting installation that looped along with the yacht’s six-level curved staircase. Nuvolari Lenard designers asked the Preciosa team to use feathers as their inspiration; think of a bird flying free. The Preciosa engineering team crafted a twisting metal frame on which 34 handcrafted feathers were attached. The feathers were constructed from glass pearls and Preciosa´s own StarDust® for a glittering finish. Up to eight people worked on each feather, each of which took about five days to craft.   More than 52,000 pearls were used in the feathers.

The feather concept was extended through different ship levels in the form of wall sconces complementing luxurious bathroom mirrors. Five sets of different coloured wall sconces were designed to match the various colours featured on each level. For example, on the owner’s deck, purple is the predominant colour. Six feathers filled with glass pearls ranging in hues from purple to lavender were crafted into two wall sconces. Green, grey, clear, and blue pearls were included in the feathers featured on other levels.

In the board room, a stunning burst of blue dominates the space above the main table. Crystal ribbed tendrils were hand-blown and then carefully placed within the fixture so no components touch one another. This type of construction is extremely important on yachts because of the natural and constant moving of the ship while at sea. Being able to safely construct such lighting while maintaining a beautiful design is one of Preciosa’s specialties.

The formal dining room features a six-metre long lighting installation created from 64 hand-blown glass plates. The plates were made using opal and opal frosted glass which gives the fixture a soft and elegant feel. Designers liked the look of the fixture’s plates so much they decided to order four matching bowls inspired by the shape of the plates. 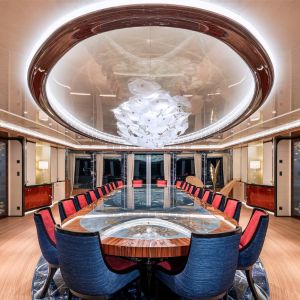 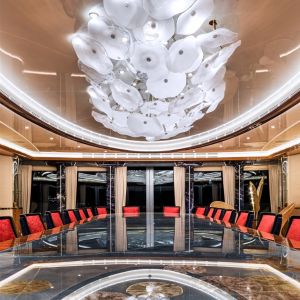 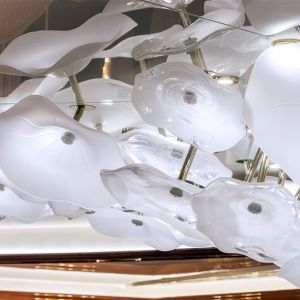 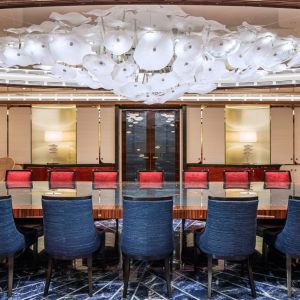 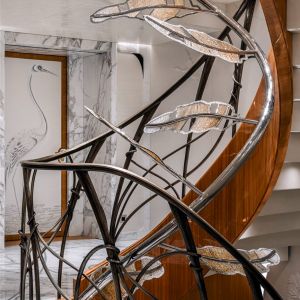 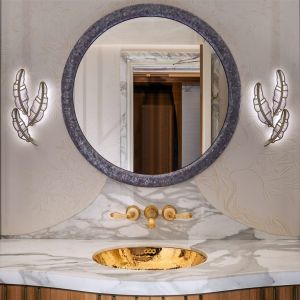 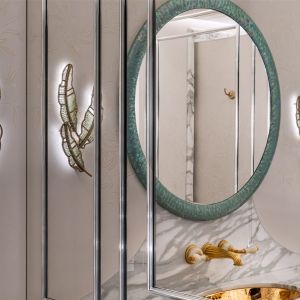