Art masterpieces don’t often remain as pristine as they did when they left the artist’s studio. Bringing these precious items back to life requires great knowhow and a careful following of the historic principles in place at the time of the artwork’s creation. Preciosa has been cultivating chandeliers since 1724. Because of this tradition, the company is uniquely positioned to revive historic chandeliers in need of restoration and repair. The City of Prague Gallery and the Museum of Decorative Arts in Prague recently called on Preciosa to take on the repair work of four unique chandeliers.

A Temple to Glass

The two museums were collaborating on an exhibition of Jaroslav Horejc, a Czech master of Art Deco. They discovered that in 1925 he had created a set of four chandeliers to be displayed in the Czechoslovak pavilion at the International Exhibition of Modern Decorative and Industrial Arts in Paris. Well-known Cubist architect Josef Gočár was the pavilion’s architectural designer, and the design of the interior was given over to architect Pavel Janak, who later became an architect for Prague Castle. The reputations of these men, and the other artisans that contributed to the pavilion represented the creativity and modernity of Czechoslovak craftsmen and manufacturers at that time.

Czechoslovakia wanted to present itself as a glass-making power; whose citizens were masters at working with this fascinating material, not only in lighting but in many other forms as well. To this day, Preciosa still takes inspiration from these masters, continuing their legacy and honouring their heritage.

Mr. Horejc collaborated with Mr. Janak to create the chandeliers featuring bronze statues and crystal glass components. The bronze sculptures Mr. Horejc designed for the lights are half a metre tall and embody the range of craft the country’s artisans were known for. They are also notable for their exquisite attention to detail. 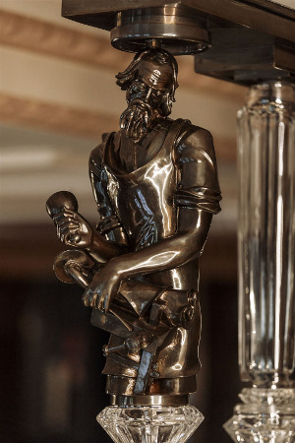 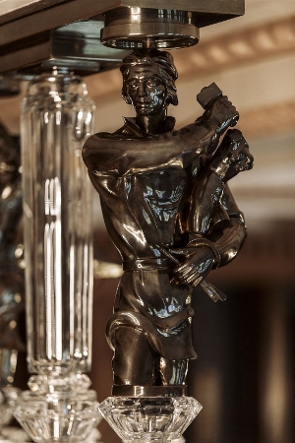 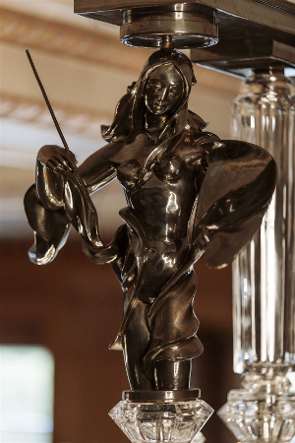 Two characters personify painting and textiles; with a paintbrush and palette being held by one and a piece of cloth and a loom featured in the other. Sculpture is depicted as a man with a hammer and chisel in his hands. The printer holds a printing plate and print block, while the architect (in a suit and bow tie) holds a pad and compass. A figure for ceramics includes a painting on a jug. The final chandelier features a blacksmith and carver. The blacksmith has pliers in his hand while the carver holds a statuette and chisel.

Still a new state on the world stage, Czechoslovakia was looking to make its mark in a global context. The country became active in a number of organizations and one way they showed their support was by lending their design expertise to the buildings where these organizations were headquartered. After the 1925 Exhibition ended, Czechoslovakia gave the chandeliers to the International Labor Organization’s headquarters in Geneva, Switzerland (now home to the World Trade Organization). The lights were hung in the library, and reports published from that time state “the chandeliers are in harmony with the decoration of the library hall and are proof of the genius of Czechoslovak modern artists."

Through the museums’ research, they learned the chandeliers were manufactured by the Elias Palme factory. Preciosa Lighting, as the successor of Elias Palme’s legacy, was called upon to undertake the careful renovation that would be required. This documented knowledge, together with Preciosa’s ongoing technological advances means the company was able to expertly renovate such delicate lighting work. Preciosa could guarantee adherence to historical procedures and stay true to the original designers’ intent. After a thorough survey of the chandeliers themselves as well as historic documents dating to the time the pieces were created, a plan was put in place to either restore or recreate the singular features.

After a thorough survey of the chandeliers themselves as well as historic documents dating to the time the pieces were created, a plan was put in place to either restore or recreate the singular features. 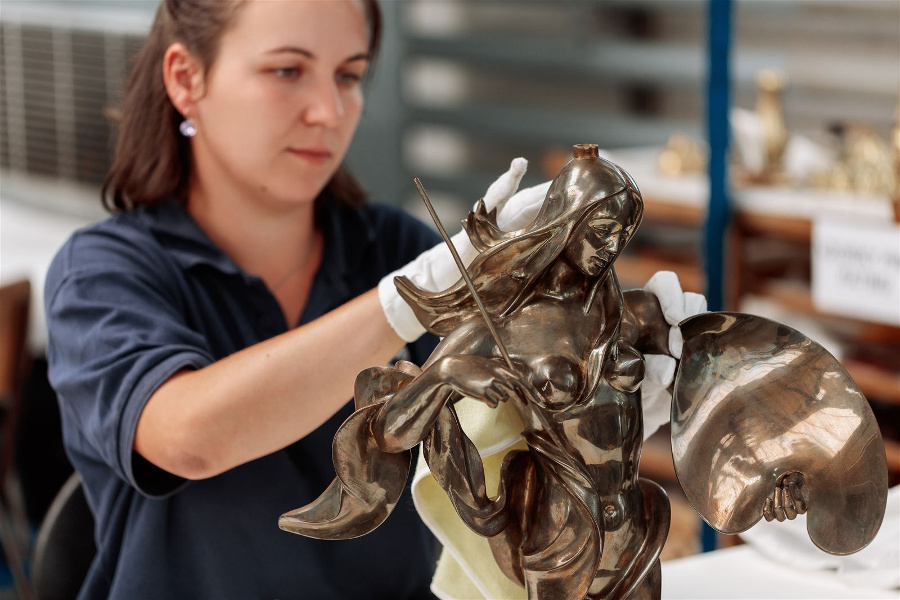 The bronze statues were individually cleaned and polished, as were the remaining crystal elements. 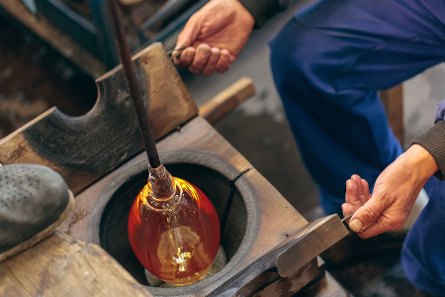 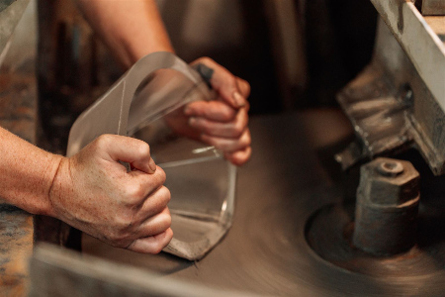 Broken or missing crystal pieces were manufactured using the same techniques as in Elias Palme’s time.

“More than 200 parts have been recreated one by one, by hand, by the skilled Preciosa artisans, in full compliance with the original specifications of almost one century ago,” said Danio Campanelli, Project Manager for the World Trade Organization. “I was impressed by the professionalism of Preciosa; they accomplished their work at a level of quality even higher than we could imagine.”

The historic value of the four chandeliers has been honoured. 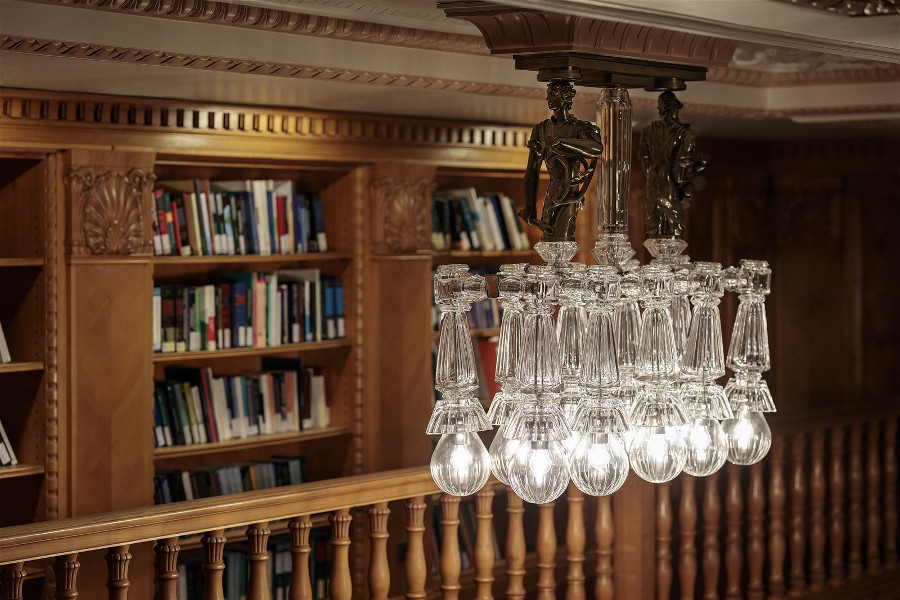 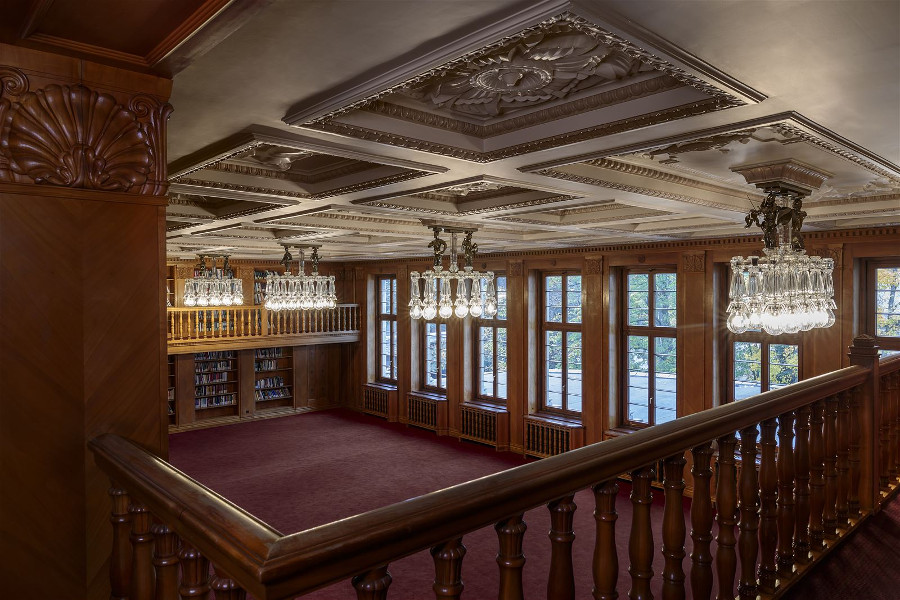 Today, the chandeliers shine brightly in the library of the World Trade Organisation in Geneva, reflecting grace and history to all who pass beneath them.